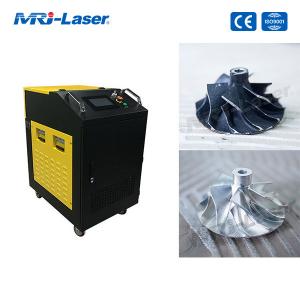 Packaging Details : Wooden boxes or flight cases with wheels, which are safe and suitable for international transportation.

After Warranty Service : By air, by sea, by railway etc

Trade terms : FOB, CIF, DDP, DFR or any other term as you request

Portable Metal 80W Handheld Laser Cleaning Machine With High Safety
Product Description
MRJ-FL-C80 laser cleaner has the characteristics of no grinding and non-contact. It can be used to clean not only organic pollutants, but also inorganic substances, including metal rust, metal particles, dust, etc.
The application fields include: rust removal, paint removal, oil removal, cultural relics repair, glue removal, coating removal, and plating removal.
80W laser cleaner uses high-brightness and directivity pulsed laser to form a laser beam with a specific spot shape and energy distribution after optical focusing and spot shaping, and irradiates the contaminated material to be cleaned, and the pollution attached to it after the material absorbs the laser energy, it will produce a series of complex physical and chemical processes such as vibration, melting, burning, and even gasification, and finally will make the contaminants separate from the surface of the material. Even if the laser acts on the cleaned surface, most of them are being reflected off, it will not cause damage to the substrate, so as to achieve the cleaning effect.
Pruduct Parameters
Product Details 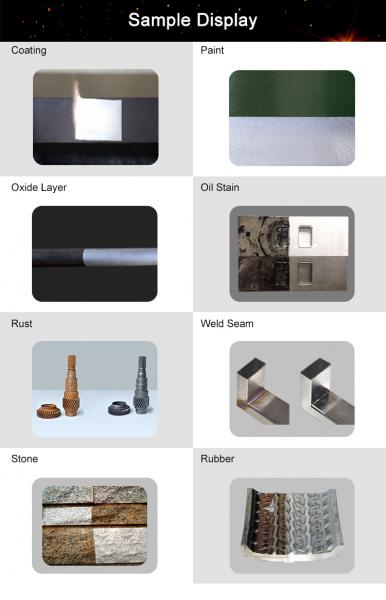 Knowledge:
How laser cleaning is achieved and some applicable fields
♦ The researchers placed the paste in a cylindrical mold and baked it for several hours. After solidified, graphite blocks were placed in an oven and pointed at a laser, then argon gas was pumped in the direction of the laser points. The oven temperature is about 1200℃. As the laser ablated the target paste, carbon nanotubes formed and were carried by air currents to the cold copper collector. Like carbon nanotubes formed using arc discharge technology, carbon nanotube fibers were deposited in a haphazard tangle pattern. Single-walled nanotubes were formed from blocks of graphite and metal catalyst particles, while multi-walled nanotubes are formed from pure graphite materials.
♦ This variation of application is achieved by ablating the coating material from the source, depositing it on the surface to be coated, and using laser ablation to form the coating. This is a special type of physical vapor deposition called pulsed laser deposition (PLD), which allows coatings to be made from materials that do not easily evaporate in any other way. The process is used to make certain types of high-temperature superconductors and laser crystals.
♦ Long-range laser spectroscopy combines laser ablation to produce plasma from a surface material. The composition of the surface can be determined by analyzing the wavelengths of light emitted by the plasma. Laser ablation is also used to create a pattern that selectively removes coating from the dichromatic filter. The product is used for stage lighting, for large scale projection, or for calibrating machine vision instruments.

Thank you! Your message has been sent to the following suppliers.